​MUUSAN is guided by a dedicated group of social justice activists representing a diversity of Unitarian Universalist congregations from across Maine.

Sue Ellen Bordwell​ has been a member of the First Universalist Church in Yarmouth for 30 plus years, serving in a variety of capacities, most recently as a member of the Faith In Action Council. For the last few years, she has been attending MUUSAN meetings, and she was the MUUSAN UUtheVOTE 2020 Statewide Coordinator. During the last year on the Climate Change Issue Group, she worked on legislation to increase support for and increase of town recycling of product packaging.

Deborah Crump is a member of the First Universalist Church of Norway, Unitarian Universalist. She is a member of the Social Justice committee at her church and has participated in many activities over the years in support of LGBTQ and women’s rights, environmental, racial, and economic justice. She has been a home hospice nurse for over 30 years and lives with her life partner in the home they built off the grid in the woods of western Maine. She enjoys gardening, playing the ukulele, writing, her 2 cats, her almost three year old grandchild and her connections to the land.

Melanie Lanctot, MUUSAN Treasurer, lives in Readfield, is a retired data analyst for the State of Maine, and has been a member of the Unitarian Universalist Community Church of Augusta for 30 years. She is a founding member of MUUSAN and has been a leader or co-leader of the Climate Issue Group from 2013-19. In 2017, the Natural Resources Council of Maine recognized her work on “issues relating to solar power and climate change” at their People’s Choice Awards night. An eternal student, she is active with Senior College at the University of Maine Augusta campus, and in 2015 she became a Maine Master Naturalist in order to share with others her fascination with the natural world. Hobbies include nature walks, drawing, writing light poetry and choral singing. 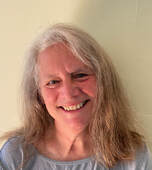 Michaela Loisel, a 30+ year member of the UUCC of Augusta, co-chairs the Social Justice Committee and serves as a Congregational Legislative Liaison for MUUSAN. She retired from a beloved career in State Government working as a Human Resources Manager with a focus on Equal Opportunity - workplace fairness, equity and accessibility. A native Mainer and long-time resident of Hallowell she has two grown daughters who are also working to make the world a better place. Michaela lives in Hallowell with her wife, Angie Blevins a talented artist and handywoman.
​ 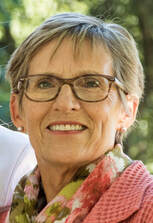 Jane Makela is a member of First Universalist Church in Yarmouth, whose involvement with immigrant justice work was inspired by the UUA’s suggestion more than a decade ago that its member congregations study immigration as a moral issue. She joined the MUUSAN steering committee in early 2018 and became co-chair of MUUSAN’s Racial, Native and Immigrant Justice issue group later that year. Jane is a somewhat retired lawyer whose legal work is now entirely pro bono, advising nonprofits and helping asylum-seekers and other immigrants. She volunteers regularly at the Immigrant Legal Advocacy Project (ILAP), helps steer the Supporting Immigrant Tenants program of ProsperityMaine, and serves as Board Legal Adviser to Furniture Friends. Now that her two daughters have left the nest, Jane lives in Falmouth with her retired pediatrician husband John Vogt and Murphy, her cat.
Rev. Marty Pelham is the minister at First Universalist Church in Rockland. Bio coming soon! 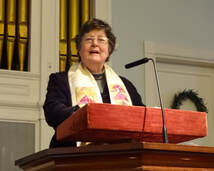 Rev. Fayre Stephenson became minister of the First Universalist Church of Norway in the fall of 2012. Ordained in 2001, Fayre came to the Unitarian Universalist ministry as a second career. She is known for her insightful story-filled sermons and for her sense of humor (in and out of the pulpit). For Fayre the greatest joy in congregational life is living our UU values through the community we share – in working and playing together, in seeing friendships grow, in ministering to each other in good times and bad. A graduate of the Harvard Divinity School, Fayre served for eight years as minister of the Foxborough Universalist Church in Massachusetts and for eight years as program director at Ferry Beach, the UU camp and conference center in Saco, Maine. Prior to entering the ministry, Fayre worked for the Massachusetts Legislature and as a writer and lobbyist for the Massachusetts Organization of State Engineers and Scientists, a public employee labor union. Fayre is the mother of two sons, Alex and Nat, and is the proud grandmother of five grandchildren. A history wonk, Fayre is also devoted to kayaking and other pursuits with her best friend, Sue Denison. 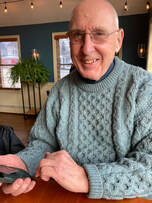 Ted Trainer has been a member of the First Parish UU Church in Kennebunk since early 2001. In addition to holding leadership positions at First Parish he worked at the  UU District level, especially in the area of Welcoming Congregations. Ted holds a doctoral degree in Public Health has spent over 50 years working in that field at the international, national, state, regional and community level. He is now retired but actively volunteers at  the community, county and state level in various areas particularly related to health planning, aging services and historical preservation. He has been married to Leslie for 55 years. They have two children and four grandchildren, all, sadly living out of state.
Kathryn (Kathy) Vezina is a member at First Parish UU Church where she joined about 5 years ago. She is a member of the Governing Board and the Ministerial Search Negotiating Team and is active on the Wabanaki Ally Team. She retired about 2 years ago from a career in healthcare (RN/JD) and is now working about 40% time with the Maine Council on Aging as their Equity & Healthy Aging Manager and on the Power in Aging (Anti-ageism) team. She also serves as the Board Chair for Maine Family Planning.She lives in Portland with her husband and standard poodle puppy, Dolce. For fun, she is working with Dolce to earn his AKC Intermediate Tricks ribbon and hopes some day he’ll calm down enough and have the interest in being a therapy dog. 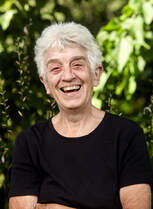 Marylyn Wentworth, MUUSAN Secretary, is a member of the First Parish UU Church of Kennebunk and is a member of the church Board of Directors.  She has been an educator in many capacities since 1963.  She was a founder of The School Around Us in 1970, a parent run democratic elementary school where all five of her children attended and most of her 9 grandchildren attend to this day.  She was also a founding member of The New School, a democratic high school which focuses on social and environmental justice.  She was principal of the school for 18 years. She worked with many national educational coalitions engaged in school reform for 20 years.  In her first year of retirement she joined MUUSAN and a group that serves immigrants in Biddeford.  She lives in Arundel with her husband Stacy of 58 years, two of her children and their families, and a huge, gorgeous garden.