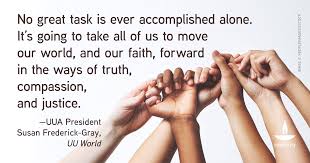 Member congregations of the UUA covenant that we will affirm and promote the inherent worth and dignity of every person, and justice, equity and compassion in human relations. However, systemic racism and other forms of structural oppression continue to make those principles illusory for many marginalized groups of Maine residents. As Martin Luther King, Jr. reminded us from the Birmingham jail in 1963, “Injustice anywhere is a threat to justice everywhere. We are caught in an inescapable network of mutuality, tied in a single garment of destiny. Whatever affects one directly affects all indirectly.”
​
Areas of focus: